Unfortunately, the honey bees that we rely on and love are facing serious health threats which are driving high annual colony losses, making it increasingly difficult for beekeepers to run sustainable businesses.
​
Today, an average of 40% of honey bee colonies will die each year.
Learn More About This Chart
The current focus on threats to honey bee health are known as the “Four P’s:” Parasites, pathogens, pesticides, and poor nutrition. These factors combined contribute to annual colony losses.

What about Colony Collapse Disorder (CCD)?

In 2006, Colony Collapse Disorder devastated many beekeepers and honey bee colonies across the US.

Colony Collapse Disorder is a syndrome characterized by some very specific symptoms, like booming metropolis suddenly emptied of its working population: the majority of worker bees in a colony disappear and leave behind a queen, plenty of food and a few nurse bees to care for the remaining immature bees and the queen.  As a result, the colony dies.

Scientists still don’t know for sure what causes Colony Collapse Disorder, and it is infrequently seen today. Even though CCD is not at the forefront of honey bee health concerns today, we continue to see high annual losses related to the “4p’s.” 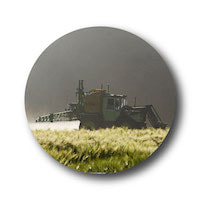 Pesticides are chemicals that are used to control unwanted pests. From mosquito and tick repellants to weed killers for lawns to agricultural chemicals, pesticides are used in the USA and around the world every day for a variety of reasons – some of them lifesaving.

Pesticides most often affect bees from agricultural use, lawn and garden use, and in-hive products. Beekeepers rely on pesticides to treat Varroa mites and farmers and gardeners rely on pesticides to treat unwanted insects, funguses and weeds. While insecticides like neonicotinoids are the most widely known pesticides to have an impact on bees and pollinators, other pesticides such as herbicides can have indirect effects if they drift into habitat areas and kill off the blooming plants that bees need to survive. Even some fungicides may have unintentional effects on honey bee nutrition, or may increase toxicity when mixed with other chemicals.

This chart shows the proportion of pesticides, by target, in wax samples taken from honey bee colonies across the united states. Varroacides make up a large chunk, probably because beekeepers must expose their colonies directly in order to control varroa. Beekeepers have also historically treated their colonies with a fungicide to control Nosema, and bees encounter other fungicides while foraging in cropping systems. Fungicides are often used in almond production, which many colonies visit for pollination.
When considering pesticide effects on pollinators, including neonicotinoids, scientists and beekeepers must be aware of the lethal effects as well as sub-lethal effects.
Sub-lethal effects can include sensory impairment, reduced immune functions, etc.

Pesticide research is often inconclusive because of difficulty reproducing realistic field conditions in the lab and vice versa.

There is a large body of research available it is often contradictory, and more research needs to be conducted to fully understand the full effects of pesticides on honey bees.

Pesticides are likely not going anywhere anytime soon, but  many groups are working on mitigating risk to honey bees and other non-target insects through the development of communication tools, and the use of integrated pest management (IPM).

There are many resources that can be used to learn more about the use of pesticides in the united states, for example the following tool from the United States Geological Survey, which keeps track of pesticide use in the United states.
​Another web tool, where you can plug in your address into an interactive map and see what crops are around is:  https://app.beescape.org, 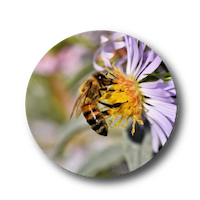 ​Just like humans, honey bees are better able to stay healthy if properly nourished, and the best source of nutrition is from natural sources – in the case of bees, a diversity of blooming plants. Access to floral resources is essential to honey production and good nutrition mitigates other health stressors including Varroa, pesticides, and pathogens.

Honey bees and native pollinators are literally “losing ground” as agricultural land use expands.  Corn and Soybeans are the two monoculture crops that use the most land in the USA. These crops do not depend on bees for pollination and tend to be heavily treated with agricultural chemicals.
Click here to load this Caspio Cloud Database
This chart, sourced from USGS data, illustrates the growth in corn and soy crops since 1986 along with acres enrolled in the Conservation Reserve Program (CRP). The Conservation Reserve Program is a land conservation program administered by the Farm Service Agency (FSA). In exchange for a yearly rental payment, farmers enrolled in the program agree to remove environmentally sensitive land from agricultural production and plant species that will improve environmental health and quality.  Learn More Here 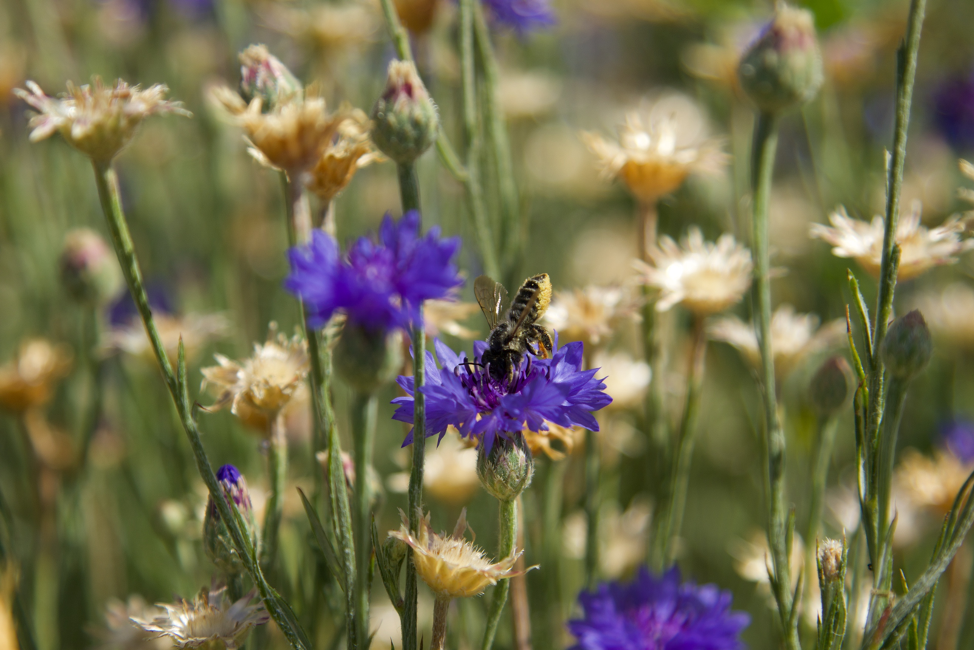 A leafcutter bee forages on a batchelor button in a pollinator plot
​Beekeepers have tried to give bees a boost by using supplements. Supplemental protein can be used when pollen is not readily available to support brood production.  This works for a little while but eventually a pollen source is needed for the colony to remain healthy.

Beekeepers will also supplement colonies with sugar if they need additional energy stores to survive winter. Feeding bees is a part of beekeeping, but there is no replacement diet. 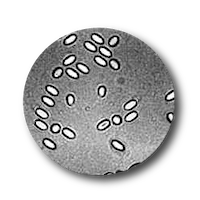 Nosema cerane spores
​Bees encounter viral, bacterial, and fungal pathogens that can have serious impacts on colony health and even survival. Some of these pathogens are highly contagious on their own, and others can be  also spread by the varroa mite.

Beekeepers maintain constant vigilance and routines to combat pathogens, including administering a program of  varroacides and other treatments as needed.

Some infections are more worrisome than others. The spore-forming bacteria that causes American foulbrood (AFB) is so persistent that destroying the colony completely is often needed to prevent the spread of the disease. 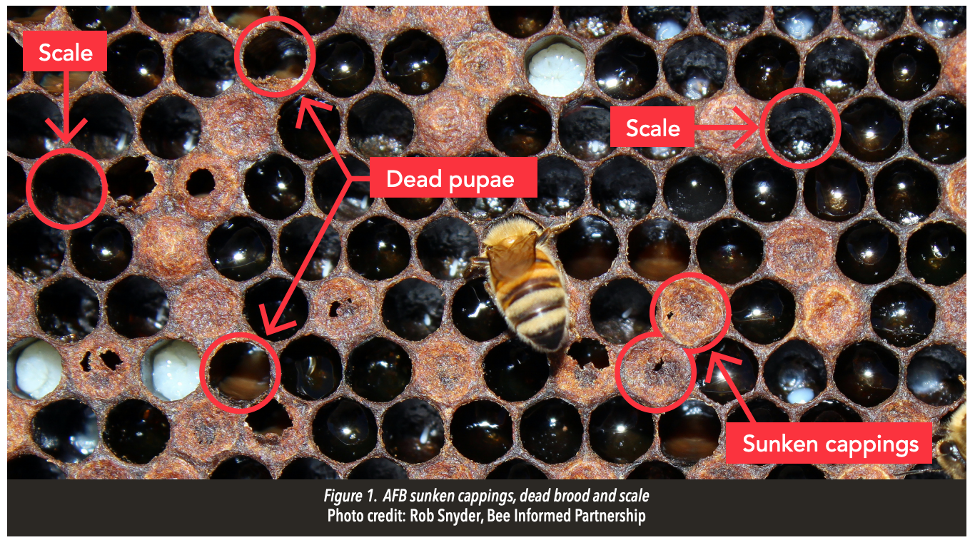 Because of diseases like AFB, each state has an apiary inspection program to help beekeepers deal with pathogens, and prevent the spread of disease. This is also why beekeepers manage their bees within a colony that has removeable frames. Getting an up-close look and sample of the honey bee brood is essential to monitoring the health.


As problematic as bacterial and fungal infections are for honey bees, viruses are incredibly wide-spread, due to the prevalence of the Varroa mite. 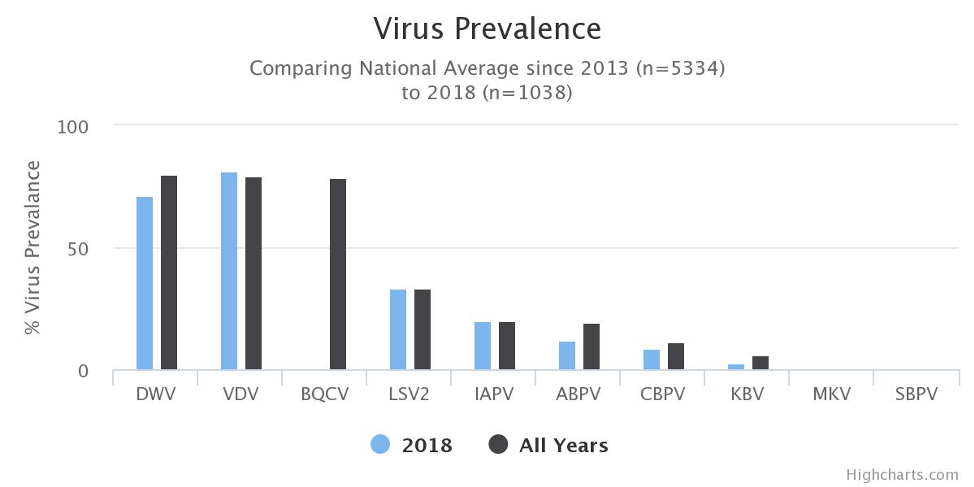 This chart from the Bee Informed partnership shows prevalence of 10 different viruses in bee colonies across the U.S. Deformed wing virus (DWV) is closely linked to varroa mite infection. On average DWV is found in roughly 80% of bee colonies sampled across the United States. Bees with twisted, deformed wings, are a sure sign of DWV infection (and varroa mite infestation). The bees, unable to fly, can be seen crawling in front of the colony. 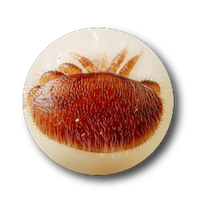 The single largest culprit of colony losses is the parasitic mite Varroa destructor. Sometimes compared to a ‘dirty needle’, Varroa mites make a hole and feed on honey bees, vectoring viruses and bacteria as it does so; the mite was introduced from Asia, and the Western honey bee is very vulnerable to this pest. Left unchecked, this mite will kill most honey bee colonies.
​
Most beekeepers use chemical treatments to control Varroa mites and keep colonies alive. This is not ideal because chemical treatments are costly and laborious, have variable results, can leave residues, and may have sublethal effects on the bees themselves. Mites have also repeatedly developed resistance to chemical treatments. ​ ​

Beekeepers desperately need more tools to control Varroa mites, which can be used in a wide variety of conditions. Unfortunately, the market for these tools is quite small in comparison to other markets for new pest control research and development. Another, more sustainable approach to managing Varroa is through development and use of mite-resistant bees. A variety of mechanisms such as grooming and brood removal are known. The best characterized mechanism of resistance is the behavioral trait called Varroa sensitive hygiene (VSH). Bees that express VSH can detect reproducing Varroa in capped brood and remove the infested larvae, ensuring that Varroa do not successfully reproduce, keeping mite populations low.

Learn more about VSH Bees:
It is important for all beekeepers to control Varroa mites because honey bees can spread Varroa from one colony to another. Often, this occurs when a colony that has been weakened by Varroa mites is robbed of its honey by a stronger colony. In the process, the stronger colony brings mites home and becomes vulnerable itself.
​
The Honey Bee Health Coalition offers excellent free tools and Best Management Practices for Varroa management.
The Bee Informed Partnership started measuring colony losses in 2006, assuming that winter was the main mortality of bees. When beekeepers said they were losing colonies at higher rates in the summer than in winter, summer losses were measured separately, and summer and winter colony losses were combined to calculate total annual losses. Summer losses were unexpected, why would bees suffer in the prime of the bloom season? Persistent colony losses in summer points us to pesticide exposure in crops, reduced availability of natural, nutritious forage, and honey bee pests and diseases.

The acceptable loss rate (represented by the purple bars) is the average percentage of acceptable winter colony loss declared by the survey participants in each year of the survey. In the past, beekeepers never thought they should lose 15% of bees, but as colony losses increase, that threshold has also increased.

In addition to showing how high losses are, these interesting changes in how colony losses are changing is just one piece of evidence that honey bee research and data are important to understand the picture of honey bee health.

For more information about the Bee Informed Partnership visit: www.BeeInformed.org